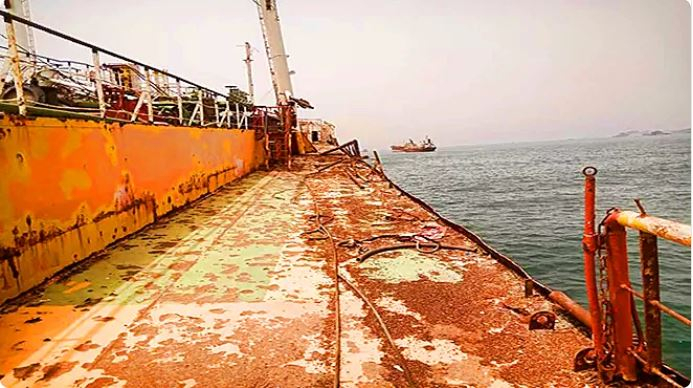 ALL OF THEM OWNED BY ALEISI, UNREGISTERED AND WITHOUT WORK PERMITS

The humanitarian Press Foundation (HJF) revealed to the private sources of the General Administration of maritime affairs (Requested not to Mention his name) that all 12 damaged and potentially sunken vessels in the Gulf of Aden have expired, unregistered, unknown and do not own Work permits for maritime navigation have and have stopped sailing at sea since before the war in March 2015.

According to the General Administration of maritime affairs, the ship named "Coral” has become a real disaster today, may destroy the environment and marine life in Aden. It was a Decaying oil tanker carrying 90 metric tons of diesel oil and one of 12 dilapidated and sunken ships in the port of Aden many years ago.

There are documents and inspection reports of some of the 12 scrapped ships issued before 2014 confirm that most of these ships have expired, are below the standard, and are considered unsuitable for permanent navigation. They have been used as floating fuel tanks for many years after the war and their survival poses a serious threat to coastal areas, marine life, local residents, the environment and the whole city, as confirmed by the General Administration of ocean affairs and the General Administration of environmental protection. 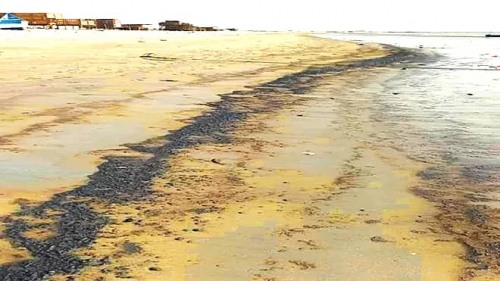 The investigator of this report obtained an official disclosure from the Aden regional marine information exchange center of the Ministry of transport, name lists of the 12 abandoned oil tankers that have been parked in the dock of an overseas company that are owned by the business man Alisi for many years and is located in Almikhtaf zone in Aden international port, showing the date of their last voyage.

According to the assessment report of scrapped ships issued by the environmental protection administration in February 2022 (we got a secret copy of them), many scrapped ships in very bad condition continue to exist in the hijacker throwing area called “Almikhtaf “located in Aden port so far still forming a serious pollution of the marine environment and its obstruction to navigation, especially since the prewar period in March 2015.

The same report stressed that "during this period, these ships were not maintained, resulting in hull corrosion. Some of them may tilt, sink easily, and pollute the marine environment and the process would be hard to get them out if they still continue to exist over there.

ships (a sub-standard ship) mean a ship with a hull, machinery, equipment, or operational safety that is significantly below the standards required by relevant conventions or whose crew does not conform to the content of a safety regulation document. Ships without standards are classified according to: Absence of the main equipment or arrangements required by the conventions, the failure of equipment or arrangements to meet the relevant specifications stipulated in these conventions, in addition to the marked deterioration in the condition of the ship or its equipment due, for example, to poor maintenance, as well as the lack of capacity required of crew members to operate the ship or Not being informed of basic operational procedures, in addition to the shortage of crew members or the insufficient certification  that they obtain. 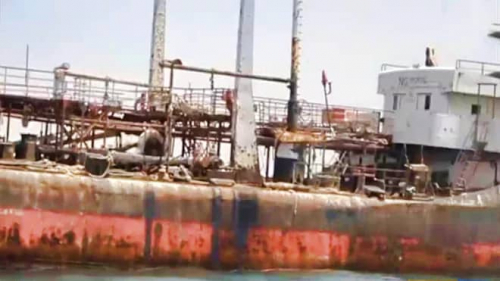 The ship DIA-1 sank in the anchorage area called “Almikhtaf” on July 17, 2021, causing pollution to the marine environment. These holes led to its tanks and engine rooms, resulting in the leakage of oil materials and other wastes contained within them into the sea, and part of the pollution was arranged at the seabed, and the other part moved to the coasts of the Al-Haswa, Al-Khaysah, Barbariya and Al-Nimr districts in the Buriqa districts,” according to the report of the Public Authority for Environmental Protection.

The same environmental protection report confirms: "To this day, the wreck of the DIA ship is still submerged in the same place, and it has not been recovered yet. There are many dilapidated single-hull ships in the anchorage area of ​​Aden International Port, whose presence poses an environmental threat and threatens the safety of maritime navigation."

“In fact, what is happening in the port of Aden since 2015 convinced us that the port has become a dangerous oil waste landfill, threatening all areas of life in the city, whether land, sea or human beings. The concerned international organizations have stopped giving permits and classifications for these tankers to sail," said colleague Farouk Moqbel Al-Kamali, a data journalist and information auditor. 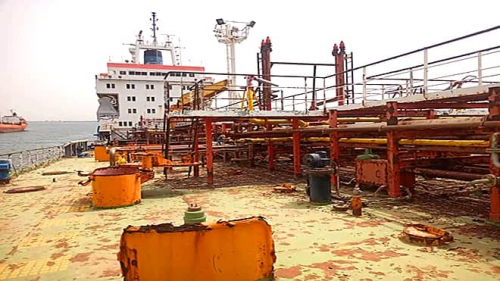 He adds: "In 2021, one of these ships (Dia1) sank, causing oil pollution, which was a strong indicator of what could happen in the future, which sparked my interest to track 12 oil tankers using open-source tools to discover that these tankers were finished when Yemeni banks and merchants raced to buy and operate them via A road of companies owned by Yemeni businessman Ahmed Al-Eissi.

He added: "There is no evidence that it was a lease ending with ownership, because the names of the owner of these ships remained constant until they stopped, while Al-Essa served as a commercial manager for them, operating them through his multi-name companies. Previous information has been removed from open source tools.

The oil tanker “Yemen Oil 6” stopped in the dumping area in the port of Aden on March 29, 2013 AD, according to the statistics of the Regional Maritime Center for Information Exchange, eight years and five months ago, carrying the number IMO: 7941150 and raising the Romanian flag, and it lost its classification since 2004 No permission to sail was given, but in 2011 the ship’s ownership was transferred to the Asia International Company, one of the companies that are owned by the  merchant Ahmed Saleh Al-Eissi. It was managed by the Overseas Company, that also owned by Al-Eissi, and raised the flag of Sierra Leone and later returned to raise the Romanian flag.

The tanker “Yemen Oil 1” stopped in the dumping area called “ Almakhtaf”  in the port of Aden on October 10, 2015, according to the statistics of the Regional Maritime Center for Information Exchange, 10 years after its classification and declaration were suspended on September 1, 2005 AD. 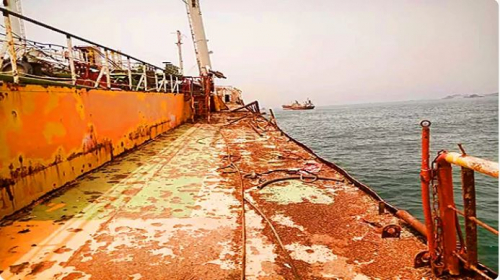 A chemical product (oil) tanker built in 1982, and got the latest classification in 2005. According to the data of the ship tracking station, the ship was registered separately by a cooperative credit bank called CAck Bank, Haddah district, Sana’a  in 2011. According to the statistics of the Regional Ocean Information Exchange Center, the ship stopped in the Dumping area of Aden Port Called “Almakhtaf” on August 23, 2015, with the number IMO:800111 and the flag of Malta. According to the open information database owned by Arabian Gulf Shipping and Trading Company, a company of Al-Eissi Group registered in Egypt, Greece, Singapore and Ukraine, the ship inspection results in 2012 showed that the tanker's age had passed.

The oil tanker "amira al-Bahr 2", built in 1977, is the latest classification of the company purchased by Cooperative Credit Bank in 2007 in 2009. It lasted until 2011 and was owned by the bank and operated by an overseas company of Al-Eissi Group. The company docked at “Al-makhtaf” in Aden Port on May 29th, 2015, flying the Japanese flag with the number of IMO 771881.

It is a chemical / oil products tanker built in 1985 ; its classification was withdrew in May 2010, and in the same year it became owned by the Black Sea Shipping and Trade Company and managed by an overseas company, both of which belong to Al-Eisi. The open data for ships bears the number IMO: 8510489, the last flag raised by Malta. 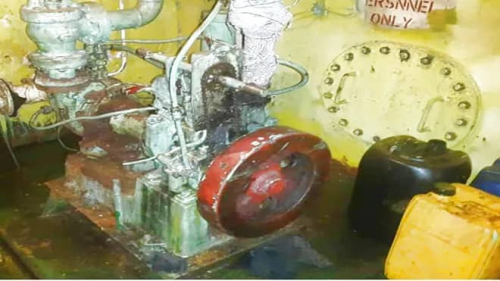 Database describes the open ships «Equasis» tanker as a petroleum gas tanker built in 1967 AD. The tanker has been registered since 2003 in the name of Overseas Cargo and Unloading of the Al-Eisi Group. The tanker, which carries the IMO number: 6720975, stopped in the Al-Makhtaf area in the port of Aden on June 23, 2017, according to the information of the Regional Maritime Center for Information Exchange and according to the information of “Ecoasis” and raises the flag of Sierra Leone, & its latest classification was  in The year 2011.

The Ship named  (Coral - Marjan) is a dilapidated tanker with a quantity of (90 metric tons of diesel fuel) inside. It is one of the 12 dilapidated ships that are threatened with sinking in the coasts of Aden. It was built in 1990 and stopped on March 27, 2015 AD in the dumping area in the port of Aden, according to Statistics of the Maritime Regional Center for Information Exchange at the Ministry of Transport - Aden.

The ship (Coral), according to a previous report by colleague Farouk Moqbel, carries the number (IMO: 8918447), and is flying the flag of Sierra Leone, and the last insurance classification obtained by the company was in January 2015 - Ships that are completely unseaworthy and have been used as floating tanks for 7 years. 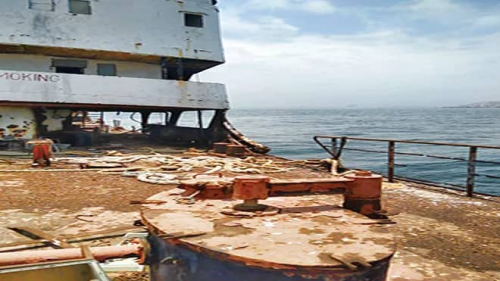 Farooq pointed out that, according to the statistics of the Regional Ocean Information Exchange Center of the Ministry of Communications of Yemen, the interesting information in the story of CORAL or Marjane oil tanker shows that this oil tanker and the three other oil tankers belonging to the same United Arab Emirates company, DOKKEN-1, SIMPHONY and SHATT AL ARAB-1, all stopped at Dumping Area in Aden Port on January 13, 2016, June 19, 2016 and December 18, 2011, respectively. According to the Regional Ocean Information Exchange Center, in the navigation report of Aden Port Terminal in the middle of last year, three ships "DOKAN 1", "SEM FONI" and "I" were listed as ships waiting for diving instructions, and they were followed by an overseas company. According to future navigation reports, these tankers found false navigation data in Asian, African and Gulf ports by manipulating the signals of their communication devices. According to the documents and inspection reports issued by HAMA in 2012/13, during 2012/13, most of all 12 abandoned and potentially sunken ships were considered as expired and unable to sail permanently. 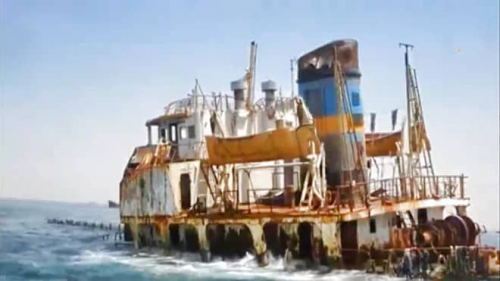 Their service life was near the end in 2012, and they were listed in the list of (sub-standard) ships, because these ships posed serious threats to maritime safety and security and protection of marine environment from pollution. The same document issued by the vessel inspection authority of the Bureau of Ocean Affairs (10 years ago) strongly suggested that the work of these abandoned vessels should be suspended before they are replaced with EPB data, and the requirements of national laws and legislation and relevant international conventions should be fully complied with "Among all the ships docked by Alisi Group in Aden Port, a common factor is that these ships have a long age and have been uninsured and classified for many years," confirmed reporter farooq Muqbel.

Report to the Attorney General

The reports of the competent authorities such as the General Administration of Ocean Affairs and the General Administration of Environmental Protection emphasized that it is necessary to dispose of these 12 sunken ships in the Gulf of Aden, because these sunken ships form a serious threat to maritime safety and security, as well as to coastal areas, marine life, the environment and human beings.The continued existence of these shipwrecks may cause great environmental and marine disasters. 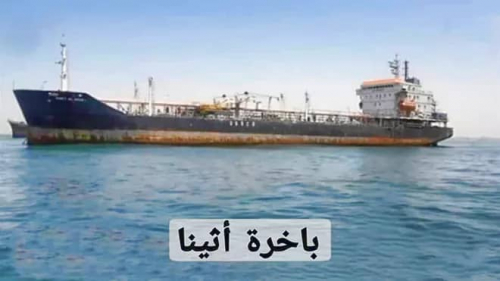 We believe that this and other investigations will be published as a communiqué of the Attorney General, Judge Qaher Mustafa. We asked him to set up a committee to investigate the disaster and those responsible, as well as the tolerant attitude of the competent authorities. We also call on civil society organizations and lawyers in Aden to file a lawsuit against the competent authorities in accordance with Article 165 of the Republic Decree of Law No.12 of 1994 on crime and punishment, accusing them of treason and collusion with Alisi  a Yemeni businessman.

We will discuss in the upcoming investigation the impact and damage of oil spill, as well as the problem that 12 damaged and sunken ships are left on the coast of the Gulf of Aden, and discuss emergency solutions and remedies to legally control environmental pollution.

Interrogated and reported by  Mr. Bassam Al-Qadhi a scientific journalist, specializing in climate and environmental issues.(This survey was conducted with the support and supervision of the Humanitarian Journalism Foundation “HJF". 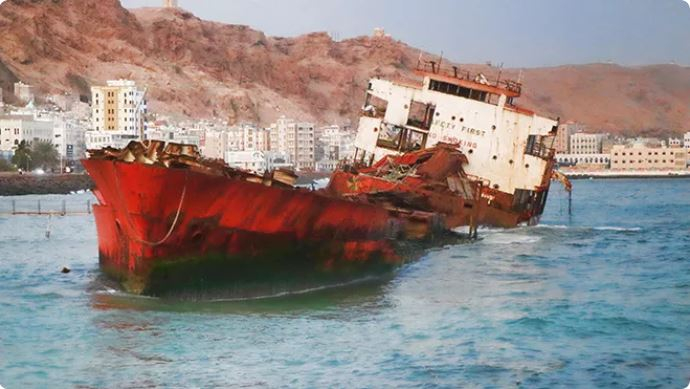 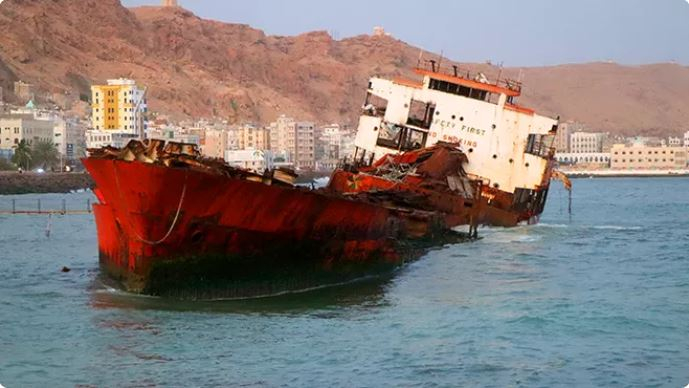 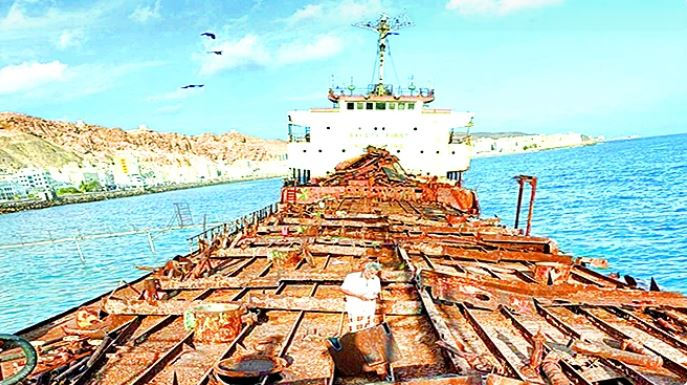